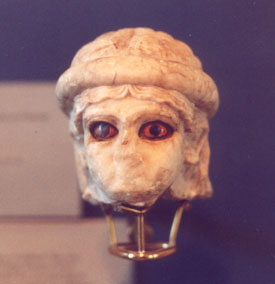 EnHedu'Anna (En HeduAnna) is one of the first women named in science/technology historical texts. She was a priestess, a seeker (lover of) wisdom and knowledge.

Her father was King Sargon I, the founder of the Sargon Dynasty. He was the person who joined the kingdoms of Summer and Akkad to form the Babylonian Empire, which is the area of Modern Iraq. His reign lasted from 2334 to 2279 BCE and it was about 2354 BCE when he appointed this daughter Hedu'Anna to be "En" or priestess of the Moon Goddess at the temple of Nanna in the city of Ur.

This position of priestess of the Moon Goddess was one of real power. The "priests and priestesses directed all the activities of daily life, such as trade, farming, and crafts. Also functioning as learning centers, the temples were places in which mathematics, the sciences, and the arts were studied and recorded. However, one of the most important functions of the temple was that of an observatory used to monitor the movement of the planets and the stars.

It was from one such temple that En Hedu'Anna recorded the movements of the heavenly bodies." [Source: an early development at the Ancient Roots at Planetarium site. The page is for EnHudaAnna longer accessible.}

En Hedu'Anna is the author of some 48 poems. One of these speaks her view of Wisdom and how one attains it:

She consults [employs] a tablet of lapis lazuli

She gives advice to all lands...

She measures off the heavens,

She places the measuring-cords on the earth."

In light of this poem, En Hedu'Anna's own preoccupation with astronomy, mathematics and good governance can be understood as her means of seeking/loving wisdom [philosophy]. Additional Sources:

EnHeduAnna has fared better than many other early women philosophers. You can find some significant material about her on the web at:  En HeduAnna

The EnHedu'Anna Research Pages with archaeological finds, gives translations of her works and offers some scholarly essays: at EnHeduAnna Research pages

Society for the Study of Women Philosophers

SOCIETY for the STUDY of WOMEN PHILOSOPHERS